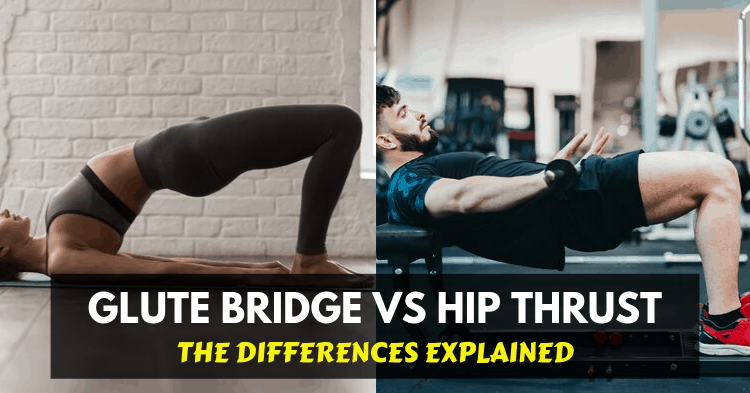 ‘Booty building’ is one of the most popular fitness trends at current. Everyone is all about that big booty life, and consequently, the world has gone mad for exercises that target your glutes. In this article, I will be going over two excellent glute exercises – the glute bridge and hip thrusts.

If you’re thinking they’re the same thing, you’re wrong, and that’s ok. There is a lot of confusion surrounding these two exercises, and we are often fed incorrect information.

Are they different? What makes them different? Which should I be doing? Read on to have all your questions answered!

About the Glute Bridge & How to Do It 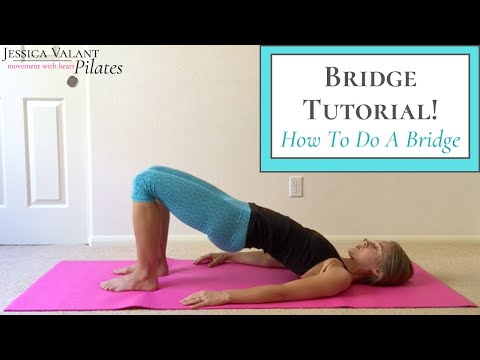 About the Hip Thrust & How to Do It 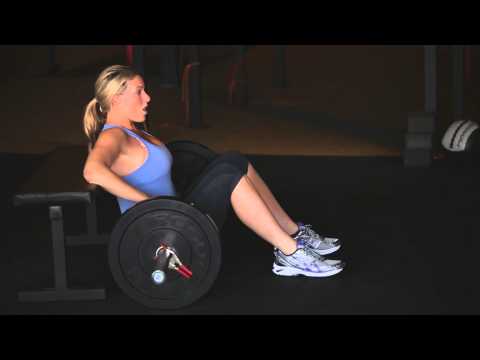 The hip thrust is another commonly performed glute and hamstring exercise. It places a strong focus on optimal hip extension. The hip thrust is performed with your feet on the floor, but your upper back and shoulders on a bench. It is a loaded exercise that is most commonly done with a barbell.

Now that you know more of what a glute bridge and a hip thrust is, let’s put them up against each other and see how they compare! Below you will find a list of exercise ‘’elements”, and how these two amazing glute exercises measure up when it comes to each of these “elements”.

When it comes to the muscles that each of these exercises target, there is not much to separate the two. Both the glute bridge and hip thrust have a focus on hip extension and target your glutes as a primary working muscle, followed by your hamstrings.

Other than your glutes and hamstrings, the other muscles that come into play when doing these movements are your hip flexors, core and lower back muscles. So, in terms of which muscles are going to get hit with the glute bridge and hip thrust – the same ones, albeit in slightly different ways.

The glute bridge is usually done with your bodyweight or resistance bands and will, of course, create a baseline strength through your glutes and hamstrings, but not optimal strength like it’s loaded counterpart.

If your goal is to be as strong as possible through your glutes and hamstrings, the hip thrust will serve you better.

Gaining mass is a tricky one, as it doesn’t only come down to the exercises themselves. A lot of it has to do with calorie surplus. However, in the gym, the factors that will encourage mass gains are: volume plus load plus speed.

Volume can be achieved with both the glute bridge and the hip thrust. But volume alone will not induce hypertrophy. Load and speed, as previously discussed, as much easier to achieve through the hip thrust.

So, which one should you be doing to gain mass? It would not be far-fetched to say a bit of both will get you on your way to a shapely posterior.

Both the glute bridge and hip thrust follow a suitable motion for glute activation. Whilst performing either of these exercises, your glutes will remain under tension and your hips get ‘opened up’ – a recipe for glutes that WORK.

However, bodyweight and/ or lesser loaded exercises, like the glute bridge, allow you to contract the intended muscles harder.

Because under less load, you’re able to concentrate better on the muscles that should be working. You can build a better mind to muscle connection without automatically recruiting the strongest muscles ‘in the area’, which are probably not your glutes if you’re just starting out.

Activating your glutes and opening your hips through consistently performing the glute bridge and other hip mobility exercises should have you well on your way to being able to execute the hip thrust without any issues!

Both the glute bridge and hip thrust can be loaded. However, loading a glute bridge is awkward. Given the angle of your body at the top of the glute bridge movement, the dumbbell or barbell needs to be held very securely in place as to not roll downwards onto your stomach, or worse, your face.

Ultimately, if you’re looking to lift heavy and/or play around with resistance, the hip thrust is the way to go. Save the glute bridge for firing your glutes into action before loading them up with the hip thrust!

We have already discussed mobility limitations and the fact that the hip thrust requires a greater range of motion. With a greater range of motion comes the need for greater strength as there is further distance to lift from A to B. This combined with the fact that the hip thrust is often performed with a heavier load, makes it a more technical exercise than the glute bridge.

The glute bridge, commonly performed with bodyweight only, and making use of a smaller range of movement is a preferable starting place for a beginner. Without the excessive range of motion required, less strength is needed. And without the added load, less core stability is entailed.

Though they both have desired benefits for the novice and advanced gym-goer, the glute bridge is the easier of the two exercises to get right.

Taking into consideration the equipment needed to perform the glute bridge and the hip thrust, there are some obvious differences between the two exercises.

The glute bridge can be done with as little as… well, nothing! If you’re looking to jazz it up a bit though, resistance bands can be added, whether they be looped around your knees, or double looped over your hips.

The hip thrust requires a few pieces of equipment.

Firstly, you’ll need a flat bench. Gym benches work best for this exercise as they are heavy and stay fixed as you push back up against them. You’ll also need a barbell – Olympic ones with traditional sized weight plates are optimal. Depending on how heavy you’re lifting, some barbell padding can also be used to make it more comfortable for your hips.

There’s no debating the fact that the glute bridge is more of a ‘do anywhere, anytime’ kind of exercise, based on the equipment required!

The sets and reps associated with a specific exercise come down, mostly, to your goals. But on the other hand, given what the objectives of different exercises are, you can choose your sets and reps for them in a way that you will get the most out of them.

As previously covered further up the list, the glute bridge is best for activation and the hip thrust is best for gaining strength and hypertrophy. For this reason, you should approach these exercises with your sets and reps tailored accordingly.

As you can see the glute bridge and hip thrusts have many similarities. But they also have several unique features which make them more suitable for some than others. Ideally though, you want to be doing a range of glute and hamstring exercises, which can realistically include both exercises.

The glute bridge is great for glute activation, which makes it the perfect warm-up exercise. If you’re new to the world of working out, it can be used merely as an activation exercise, on its own. If you’re a seasoned lifter, the glute bridge makes a great starter exercise at the beginning of your workout, before going into your heavier lifts like deadlifts, squats and lunges.

The hip thrust is an ideal exercise for gaining strength and shape through both your glutes and hamstrings. You have the option to go heavy with this exercise and capitalize on the additional range of motion required to perform it.

Are you partial to one or the other? Let us know in the comments section below!

Owner, Strength and Conditioning Coach at Life and Fitness with Nicolle and regular contributor to TheWorkoutDigest.com