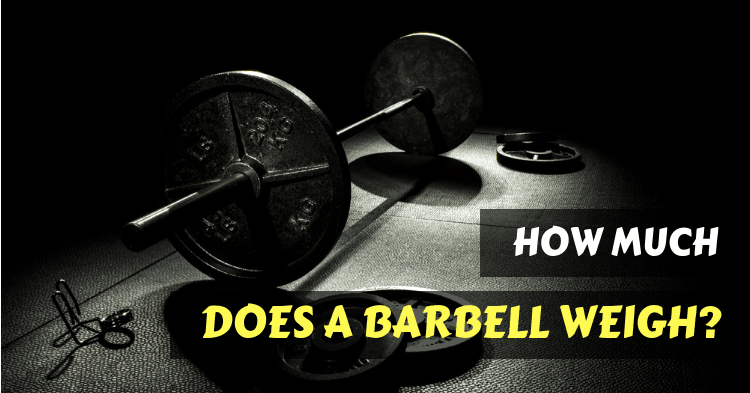 Most barbells weigh 20kg/44lbs. This is the standard weight for both Olympic, powerlifting, and “normal” barbells. Heavier barbells exist, but they’re usually dedicated to a more niche use, like the deadlift bar or safety squat bar.

How Much Does an Olympic Barbell Weigh?

The Olympic bar has to focus on flex, the ability to spin at the cuffs, and how much “whip” to provide. This is why we usually find that these Olympic-standard bars are more expensive. A standard barbell you’re likely to find at a commercial gym will be stiffer and have less spin.

The dedicated Women’s Olympic Weightlifting barbell – this weighs only 15kg (roughly 33lbs). This is because it is a thinner bar – it would be ridiculous to expect 45kg women to lift on the same bar as 160kg men and the women’s weightlifting bar is designed to reduce the grip demand on these lifters.

How Much does a Squat Barbell Weigh?

Squat bars are a type of powerlifting bar that is designed to remain stiff and reduce whip, but they can handle huge amounts of weight – unlike a standard barbell.

The squat bar is a term we usually hear used for the Texas power bar – a high-quality piece of equipment that also weighs 20kg/44lbs. If you’re planning on lifting huge weights, this is a great choice and the extra price brings serious reliability!

Whip at the bottom of a squat can be a serious problem for powerlifters, where weights can be thousands of pounds.

The safety squat bar is a different piece of equipment, with handles to reduce shoulder strain. These weigh 70lbs or around 32kg. These are heavier because they use significantly more metal. These are a great way to train if you’re getting past injury or surgery in the upper body/arms.

How Much Does An EZ Bar Weigh?

The EZ Curl bar weighs different amounts depending on the type you buy. This is because they’re not used for any competitions, so the weight doesn’t really matter – as long as you keep adding weight over time. We’ve seen them range from 5kg to 10kg, depending on the design. Those designed to deal with Olympic plates tend to be heavier since the cuffs are bigger.

How Much Do Smaller Barbells Weigh?

There are a few other small barbells that are lighter than a standard barbell.

These include the youth weightlifting bar. This is a barbell designed for technique training and usually weighs 5kg at most. These are used for youth competitions and often used in CrossFit boxes for absolute beginners. They allow you to practice technique without worrying about weight.

There’s one more question: how much does the smith machine barbell weigh? This is like the EZ curl bar – it depends on the specific product and there’s no standard weight. Because they’re supported by the rails, you’re only likely to see about 5-10lbs of actual bar weight. As with the curl bar, the main thing is that you keep adding weight to it consistently over time.

We’ve put together a quick list of what different types of barbell weigh:

Picking the right barbell is an important process for making the most of a home gym or building your dream gym. This is an essential piece of equipment. While it’s good to save money, a good barbell is a serious investment and you should focus on quality here.

If you have a good barbell, you can save money on plates and other bits and pieces. However, the barbell is right at the center of most weight training programs and a few extra dollars here can make a big change in the long-term!