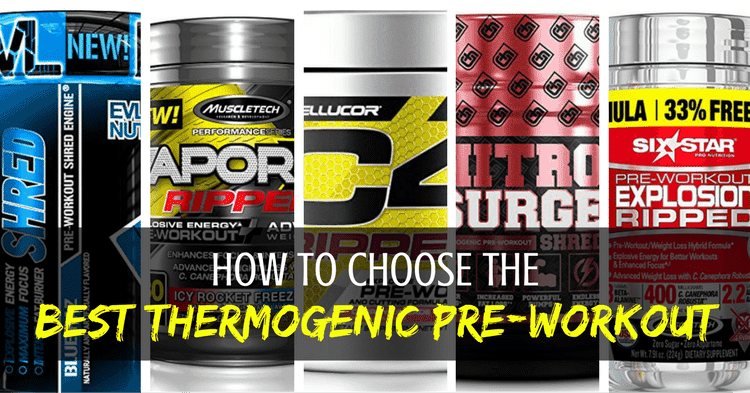 I remember when thermogenic supplements first became popular about 10 years ago. Then, they were mostly just fancy capsicum (pepper) capsules.  You’d sweat like crazy, metabolism would rev up and appetite diminish.

There is a now new trend of thermogenic pre workout supplements.  There aren’t too many of these thermogenic pre-workouts on the market yet.  However, I suspect that will change as people become aware of what thermogenesis can do for them.

Remember that there is no “perfect” workout supplement.  To lose weight and get tone, you must exercise! With that in mind, here’s what you need to know about thermogenic pre supplements before you decide to take them.

*Below, you’ll find our more detailed reviews, but you can also click the links above to see current prices or read customer reviews on Amazon.

What Are Thermogenic Pre Workout Supplements?

Thermogenic pre workouts are a specific subset of the supplements.  They still give you the same energy and focus boost as pre workouts, but contain ingredients that increase your metabolism through a process known as thermogenesis.

In simple terms, thermogenesis is the process of making heat through metabolism.

For example, we use food as fuel to heat our bodies. This is why we get hungrier in winter.  We need more food to keep our bodies warm in the cold weather!

Certain foods have been scientifically proven to naturally increase thermogenesis in the body (such as chili peppers).1

One of the best analogies of how thermogenic supplements work for fat loss is to think of a thermostat.  The higher you turn up the thermostat, the more energy is used.

Your body works the same way as a thermostat.   Hence why an article in the Atlantic said, “Just enduring winter weather counts as exercise.”

Depending on the temperature and your body, approximately 800-1000 calories per day go towards maintaining your body heat.2 Even a slight increase in thermogenesis can result in many more calories burned.

Unlike many other types of energy expenditure, thermogenesis specifically causes fat to be burned.  As if this weren’t good enough, thermogenesis also decreases appetite, which can help you eat less and lose even more weight.

Difference between Thermogenics and Pre Workouts

Thermogenics and pre-workout supplements can have a lot of the same ingredients (like caffeine).  However, they are fundamentally different.

If you want to workout harder AND lose more fat in the process, then take a thermogenic pre workout.

What Ingredients Have a Thermogenic Effect?

Virtually every pre workout and thermogenic supplement will contain caffeine as its main ingredient.  Caffeine has been proven by numerous studies to increase metabolism and fat burning. 3

Caffeine doesn’t just boost energy (which will help you workout harder so you burn more calories).  It actually causes your body to release more fat while keeping muscle mass intact.

Of course, too much caffeine for extended periods can negatively affect your nervous system.  It is important that you are actually working out hard to burn off the caffeine.  Otherwise, you’ll be feeling jittery and nauseous.

It isn’t just coffee extract which contains caffeine.  Other caffeine-containing ingredients in pre workout supplements include:

Green tea contains caffeine, so it has a thermogenic effect in this way.  However, the weight loss benefits of green tea go beyond just the caffeine.

The polyphenol antioxidants have also been shown to boost thermogenesis.  They also support nervous system health, so are a good alternative to coffee. 4

Conjugated linoleic acid is a fatty acid found mostly in animal products.  It is popular because of its proven ability to target fat deposits.  It mostly works through thermogenesis to increase metabolism, but also has many other benefits.

L-carnitine is an amino acid which is very important for energy production and metabolism.  Even though it is mostly taken for boosting mental focus, it also helps increase fat oxidation. 5

This is one of the best known thermogenic supplements.  Anyone who has eaten chili peppers knows how they can increase body temperature!

Capsicum is the chemical in chili peppers which causes “heat.”  The thermogenic effect of capsicum has shown not only to help increase metabolism and fat burning, but to continue these effects for long after exercise.  Just be warned that high amounts of capsicum can upset your stomach. 6

How to Get the Best Results from Thermogenic Pre Workouts

One of the benefits of thermogenic is that they will increase the amount of calories you burn not just while working out, but after your workout too.

The body continues to burn calories after you’ve stopped exercising. This burn is referred to as excess post-exercise oxygen consumption. However, a number of calories burnt post-exercise varies depending on how you exercised.

You will burn more calories with your thermogenic by:

Side Effects of Thermogenic Pre Workouts

Most of the potential side effects of thermogenic pre workout supplements come from the caffeine content.  Some of these have very high caffeine amounts and can cause side effects like:

If you aren’t used to consuming caffeine, then start slowly with the pre workouts.  You don’t have to follow the dosage instructions exactly (though avoid ever going over the recommended dose!)

Start slowly by taking a ¼ or ½ dosage.  If you don’t feel symptoms and need a bigger effect, then you can gradually increase to the full dosage amount.

I’m not aware of any evidence which shows that thermogenics like cayenne will lose their effect after using them for a long time.  However, your body will start building up a tolerance to caffeine.

As a general rule, stop taking a pre-workout supplement when it no longer provides you with that “tingly buzz.”

Thermogenics increase your core body temperature and help you rev up metabolism.  You will notice that they cause you to sweat a lot more than normal.

If you aren’t careful, you risk becoming dehydrated from thermogenic pre workout supplements.  Dehydration negatively affects performance, which counters the benefits you should be getting by exercising. Be sure you are drinking at least 1 gallon of water per day. 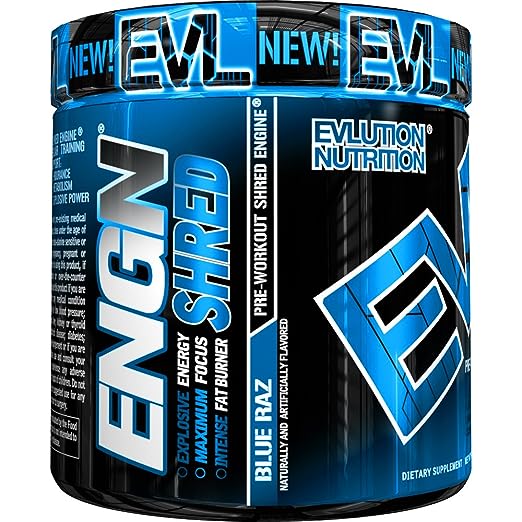 This one also made our list of best pre workout supplements for women, especially those who do a lot of cardio to burn fat.  The reason it is so popular (with men and women alike) is because of the ingredients which specifically target fat.

A lot of fat burning pre workouts mostly contain caffeine.  With ENGN Shred, there is a decent amount of conjugated linoleic acid (CLA) and cayenne, both of which boost metabolism through thermogenesis. You also have ingredients like vitamin B and huperzine A to improve focus.  Ingredients like choline bitartrate help improve muscle formation.

Best For:  Because of its emphasis on energy and focus over muscle development, this supplement is best for people who do a lot of cardio. 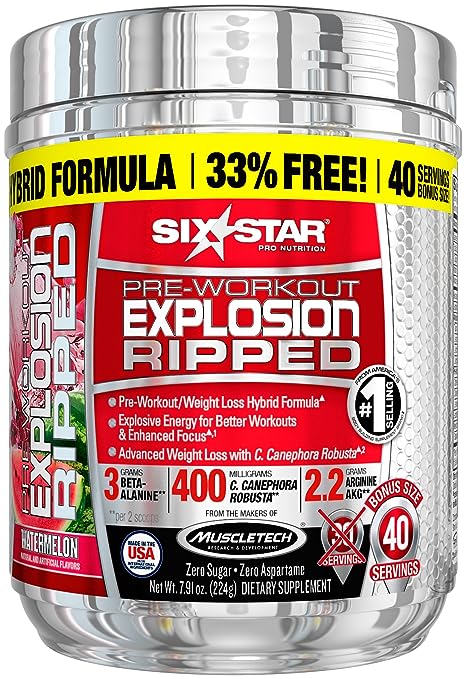 Six Star Explosion Ripped is one of the cheapest thermogenic pre workouts on the market.  The reason it is so cheap is that its main ingredients are just forms of caffeine.  Don’t be caught up with their claims about the benefits of c. canephora – it’s just a fancy name for coffee beans!

Caffeine and L-carnitine are the only thermogenics in the supplement. However, the supplement does have a good amino acid profile, which can help people doing weightlifting get better benefits.

Best For: People who are looking for a cheap pre workout supplement. 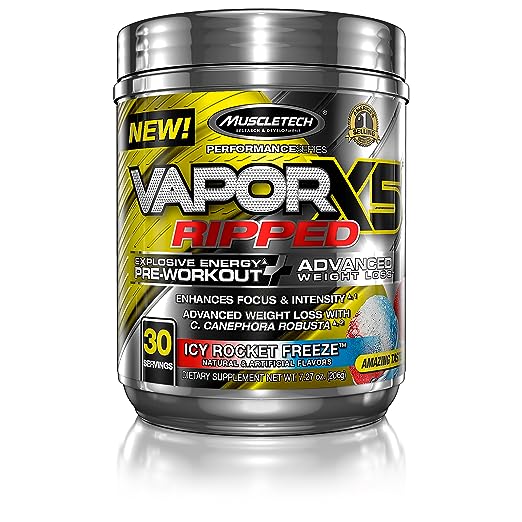 VaporX5 by MuscleTech is mostly a pre workout, though it does also provide a thermogenic effect as well.  It is one of the more popular supplements.  Most reviewers love it because it gives them energy without making them feel jittery.

The key to this supplement is that it provides energy from more than just caffeine (which is just about 240mg per scoop). The choline, L-theanine, and galangal extract are great for boosting focus.

Note that this pre workout does contain creatine.  People whose primary goal is weight loss don’t always like creatine because of the bloating it can cause.   You might want to check out these pre workouts without creatine.

Best For: People whose primary goal is getting pumped, not losing weight. 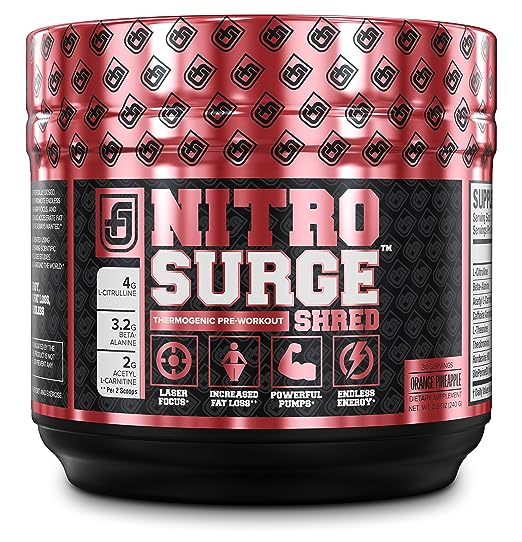 It is refreshing to find a supplement with such a short ingredients list.  Instead of adding a lot of bogus ingredients, NitroSurge Shred focused on a few quality ingredients.

There is 190g of caffeine in the pre-workout.  However, it also contains theobromine, which is the stimulant found in cacao.  Compared to caffeine, theobromine has a much milder effect on the central nervous system.  It is also scientifically shown to improve mood and alertness (good if you are having a bad day!).

The hordenine in the supplement is another energy booster and fat burner. You’ll also find L-carnitine (thermogenic), L-citrulline (improves nitric oxide production), beta alanine (for power and strength), and Bioperine (for increasing absorption).

Best For: People who both cardio and weightlifting.  Also good for people who don’t handle caffeine very well and want a stimulant with milder effects. 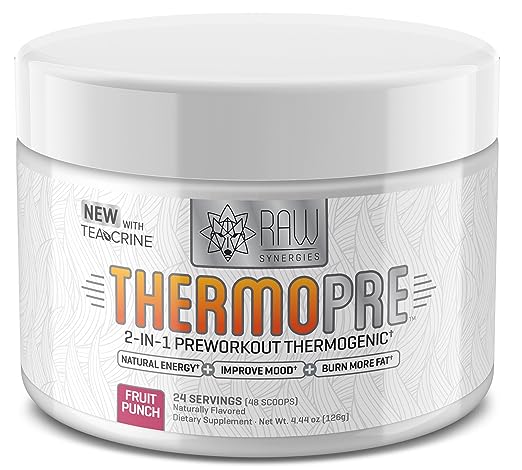 ThermoPre is a lot different than most other pre workout supplements.  For starters, it is actually focused on increasing metabolism and not just loading you with stimulants like caffeine.

While you will get a good amount of caffeine from the supplement (250mg per dose), it is also the capsicum, yerba mate, and L-cartinine which helps fat burning. The combo does a great job of suppressing appetite. Beta-alanine helps improve performance so you can do intense workouts.

To counter the negative effects that often come with caffeine, there are ingredients like ashwagandha extract. Citicoline is an ingredient you don’t often find in pre-workout supplements.  It is shown to treat cognitive impairment and can really help you focus during your workout. 10

Best For: Stressed-out people who want mental clarity as well as energy. 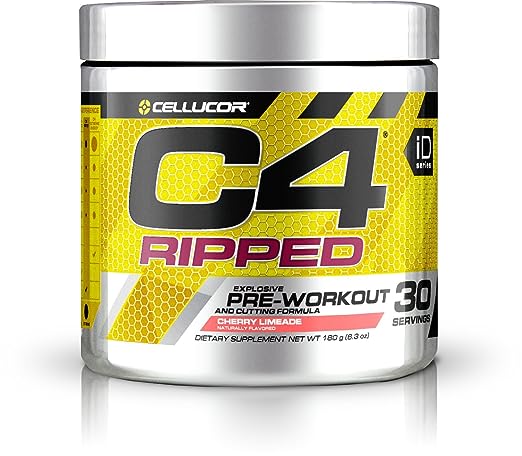 C4 Ripped is one of the most popular pre workouts on the market.  It will definitely make you feel buzzed, which isn’t a surprise considering how much caffeine is in the product.

There are also some other good ingredients for boosting performance and focus.  However, this is mainly a stimulant product.  Don’t be surprised if you feel tingly after taking it.

As for the fat-burning thermogenic effect, C4 Ripped has capsicum and l-carnitine which will boost your metabolism. The high dosage of beta alanine and arginine aren’t really necessary, but people who do weight training will appreciate the added boost these provide.

When it comes to delivering energy and promoting fat-burning, Evlution Nutrition ENGN Shred wins because of its solid ingredient profile and affordable price.

If you are looking for something milder in the energy department, then try out ThermoPre.  You’ll appreciate its stress-fighting ingredients and how it revs up your metabolism.