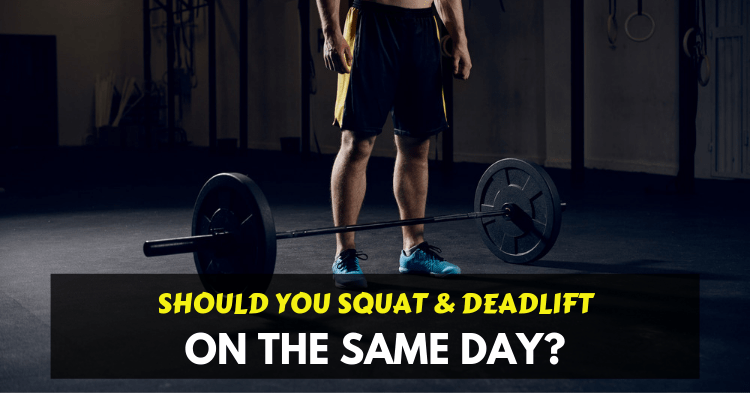 The squat and the deadlift are the two biggest movements you are likely to do with a barbell. Finding balance between these two titans of strength and power can be difficult and may leave you missing out on the best results.

Today, we’re going to talk about the way that you can squat and deadlift on the same day; when you should do them, how you can balance them, and how to make the best of both.

Read on if you want a huge squat and a mighty deadlift without dedicating a whole day to each movement!

Can You Squat and Deadlift on the Same Day?

Yes, of course, you can! It does raise some new challenges, however.

The problem with squatting and deadlifting – and why you’re reading this article – is because they’re both big, heavy lower body exercises. This makes it easy to feel like you’re too tired to do them both on the same day, especially if this is your first time training both.

You can carry the fatigue from squatting to deadlifting, and vice versa. So it’s not quite as simple as doing the exact same thing you’d do if you could take a day for squatting and a day for deadlifting.

Should You Squat and Deadlift on the Same Day?

This is a different question – but we think it has the same answer: yes.

Since it’s possible to squat and deadlift on the same day, why wouldn’t you? A good full-body program is perfect for most people with less than a year’s experience seriously lifting weights.

Should I Squat or Deadlift First?

You can do whatever you want, but we strongly recommend squatting before deadlifting. This is because the carryover of fatigue is worse when you deadlift first: the postural demands and the fatigue in the stabilizers of the spine can be a real problem.

The reason for this is pretty simple for most people: the deadlift tires the muscles needed for an effective squat, but a squat might not do the same for the deadlift. This depends on how you squat/deadlift, but it’s a good rule of thumb.

Deadlifts Tire You Out More Than Squats: Deadlift After You Squat!

The hip- and back-dominant deadlift tires the hips and back really quickly and has a long lever – the portion of the back stressed by the lift. By contrast, the squat primarily uses the muscles of the thighs and – if performed properly – shouldn’t ruin your back or hips.

The legs are involved in the deadlift, but they’re primarily important for breaking from the ground. Their role after this is limited, and fatiguing the legs will make deadlifts feel more difficult, but not risk serious issues like rounding of the back.

On the other side, deadlifts make everything after them difficult.

They’re a huge movement and you’ll find that you can feel the fatigue almost immediately. This is also one of the reasons that deadlifts are performed with less reps at the same % of your 1RM than a squat.

Deadlifting first makes everything afterwards more difficult and you just might find that your legs aren’t the weak link when you squat. If you’re rounding your back, but your legs are still fine, you’re not going to work them as effectively.

This means less leg gains, which is bad because strong legs/ hips are the point of both of these movements!

In powerlifting – the sport of the squat, bench, and deadlift – competitions always put the squat first. This is for the reasons we’ve already listed because you can lift more weight if you squat first, rather than deadlifting first.

However, powerlifting is closely tied into fitness because it’s competing in some of the most commonly performed exercises. The structure of powerlifting training is usually the basis for effective strength/size training for most people, and it carries this same squat-first mentality.

This is a tradition – a convention – but it is respected and continues to be the best way to progress your squat and deadlift simultaneously.

How to Make Most Gains Squatting and Deadlifting the Same Day

When you change to squatting and deadlifting on the same day, you’re going to need to change your approach. There are some clear changes that need to come from the way you train and there are some simple principles that can make deadlifts after squats more effective.

Obviously, you need to reduce your training volume if you’ve been used to performing squat days and deadlift days. You can work back to your current working sets/volume, but it will take a little while to get adapted.

If you have huge amounts of volume on your squat, you’ll need to compensate with your deadlift. It’s one of those trade-offs that can be difficult initially but will make sure you continue to progress over time.

We recommend stepping down to about 60-75% of your normal volume on squats and then working back up until you’re at 100% for both lifts. This will bring gains all by itself, but prepares you for the long-term process of deadlifting after squatting.

You can probably keep the intensity of your squatting the same, though you may want to take a small step back with the deadlift. You will need to learn to accommodate the additional fatigue and perform without feeling as ‘fresh’.

Keeping the reps and sets roughly the same, take your weights down by 10-15% and build back up. You’ll be building muscle anyhow, and you can focus on proper movement while you build up to your current working weights.

These processes shouldn’t take more than 2-4 weeks – but they’ll yield some great results in the long-term.

Going back to the Powerlifting style of training, one of the things that allows their training to work so well is the bench press between squat and deadlift. This kind of upper body training in the middle is great for allowing the body to recover.

If you’re going straight from squats to deadlift, the fatigue is going to be far more noticeable.

If you’ve got some upper body pressing work to do in your session, but probably not upper back movements, you should put them in between squats and deadlifts.

These can give your lower body a rest and chance to recover so you’re not too tired. You can strategically add some exercises here to get you ready for deadlifts. Alternatively, something light and powerful like some box jumps with good rest times can prepare your body for deadlifts.

Getting this little bit of rest can change how you feel drastically – especially if you’re getting intra-workout water/ carbs/ electrolytes. Take your time and you’ll see the benefits.

Alternate your Focus, Add Some Variety

Just because you’re squatting and deadlifting on the same day, it doesn’t need to be all about both every time.

For example, Romanian deadlifts for lighter days and more hip-hinging focus are a great choice. This kind of alteration needs to be considered and you can have lighter days to let the body recover/ grow between heavier sessions. Adding this variety can even stimulate greater growth over time.

One way to make squatting and deadlifting work better is to have a light squat on your heavy deadlift day – and vice versa. This allows you to keep progressing both without over-training one movement or the other.

Squatting and deadlifting on the same day doesn’t mean maxing out on both. It could mean paused squats and Romanian deadlifts for your lighter days, for example!

You can definitely squat and deadlift on the same day – but the gains aren’t automatic. To make the best of this kind of training, you have to be smart about it. It’s about balancing the demands and dealing with your recovery

There’s value to training full body and using these two big compound movements more often. From better technique to more strength/ size, you can really put them to work. If you’re patient for the first few weeks, you can equip yourself for better long-term results by squatting and deadlifting on the same day.

Take the principles and considerations we’ve talked about today and put them to work in your own training. If you’re clever about it, you can get some huge extra benefits by being able to squat and deadlift together, rather than having to split them up!

Let us know how this works for you!