But what if you can’t use it? What If your gym doesn’t have a leg extension machine and you’re still looking to develop the strength and health of your legs? That’s the problem we’re going to tackle today.

Stick with us and we’ll share the essential techniques for developing quad meat and strengthening the joints around the knee. This means better legs, stronger squats, better performance, and reduced risk of injury!

What Muscle Does Leg Extension Work? 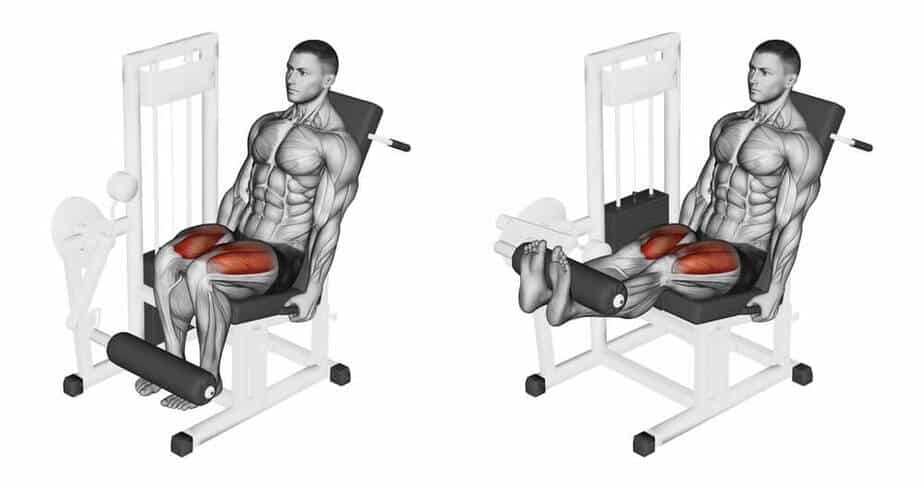 The key muscles you’ll use in a leg extension are, of course, the quadriceps. They extend the knee, but they’re also essential for movement in the hips. The rectus femoris is a muscle in the quadriceps that also flexes the hip – making it a bit more complicated than just moving your knee.

The fact that this exercise pretty much only hits the 4 muscles of the quads is unique. Whatever your favorite leg exercise is, there’s a good chance that its going to stimulate the glutes and hamstrings – even just for stability.

Not the leg extension: it’s a total isolation movement with no real effect on the training of the hamstrings or glutes. You can use it as a way of improving hamstring control by trying to flex the hams and quads at once, but it won’t load them. This is totally unparalleled in lower body training!

One of the reasons why the leg extension is so popular and effective is that it works a movement that is not seen anywhere else in sport and exercise. It suspends the hips and loads your legs right at the end with a pad.

The difference between a knee extension and a squat, for example, is that squatting involves a “pushing” motion through all of the lower body. The leg extension is a totally synthetic movement that has no parallel in sport or other exercises.

This is also the challenge of replacing the leg extension. If nothing else in the change achieves the same movement, what do we do to replace it? Well, we’re going to focus on training the muscle for the same adaptation, and doing some hold in the positions that the leg-extension develops.

With this approach, you’ll still get the same thigh development we’ve talked about, but you’ll also be putting time and effort into the same positions and under-rated processes that have made the leg extension so popular.

8 Leg Extension Alternatives You Can Do at Home

How To: Dumbbell Reverse Lunge

One of the reasons that the leg extension is so popular is how easy it is to perform for everyone from the most well-developed athletes to a first-timer.

This accessibility is important for any exercise that would replace the leg extension. There’s no point relying on extremely difficult exercises – beginners would never get good enough to use them! The reverse lunge is the opposite: an accessible, easy-to-use exercise for developing all of the muscles of the quads without the difficulty of a squat.

Start with a regular reverse lunge, add dumbbells, and then try them from a deficit. This is a great way to start developing strength and balance in the lower body. It’s a great rehab exercise in much the same way that the reverse lunge works and is a great place for beginners to start.

Looking to build amazing leg strength and quad development? It doesn’t get much better than the Bulgarian split squat.

It’s a one-legged exercise that works everything in the lower body from the hips to the quads, and it’s a great way to practice the positions of a conventional squat. It’s definitely more high-rep than a regular squat, and you’ll immediately feel it in your quads.

The stability this develops around the knee is also crucial because, as mentioned above, the leg extension isn’t just about the muscles. It’s about good movement in the knee – a joint that often suffers instability injuries and needs to be well-prepared for movement and exercise.

As with the reverse lunge, this is an exercise that can be performed at a deficit for even more challenge. This will increase the range of motion, difficulty, and make sure you’re getting more from every single rep.

Do you use the leg extension machine as a finisher for your leg day? Are you trying to squeeze out every last drop of growth?

The cyclist squat can do the same thing. It’s a squat variant that is all quad. It’s a great finisher and can be performed with light weights for huge results. The name alone should point out that its one of the most common exercises used by cyclists to develop muscle and strength in the lower body (and those folks have huge quads).

The cyclist squat elevates the heels, shifting the angles of the exercise to boost the role of the quads in the movement. The whole movement can be performed without any change in the hips, and all the change coming from a bend at the knees. Avoid locking out at the top of the exercise to increase the difficulty and really stimulate the quads.

You can’t perform this exercise particularly heavy, so you should focus on getting the reps in. Aim for 12-15 repetitions with a decent weight, and keep your heels as high as possible. These two factors are going to make sure you’re getting stimulating reps and keeping your knees healthy.

The step-up is yet another single-leg exercise. The difficulty of this exercise is great for challenging stability and developing a better extension.

Focusing on driving through the top of this exercise to full extension is important for replicating the full extension you get in a leg extension. This isn’t included in the end-range of a squat – the extension isn’t difficult or loaded.

The step up is a great way of training the top-half of the squat movement, as well as developing athletic power and actively loading the extension that’s missing from many other leg exercises.

The hack squat is another classic bodybuilding exercise that aims to provide a huge amount of stimulus to the quads. With a sled-weight rather than a free weight, it reduces the balance challenges of the regular squat and increases the range of motion.

More work (when you recover properly) = more results. The extra range and easier loading of the hack squat makes it a great choice for boosting the development of your quads. This is especially true for 45-degree hack squats.

Using these sled-weighted machines is a great way of pushing out extra reps and using drop sets to improve your muscle growth. You can add extra volume to your program without over-using the posterior chains (the lower back, butt and hamstrings), allowing you to train the quads without worrying about failing because of other muscles.

The hack squat also helps to train the muscles of the thigh during a depth that you simply can’t reach in the conventional squat. Because of the support for the spine and the ability to balance against the sled, you can reach the very maximum of your ankle/knee/hip mobility. This lengthens the range of motion even further and makes every rep more valuable.

If you’re worried about missing out on the benefits to the knee joint, you should try combining these crucial movements with the L-sit. This is an isometric hold that forces you to use the quads to keep your legs straight.

The point of this movement is to strengthen the connective tissues. Isometric holds are great for this, and the L-sit makes up for the lack of ‘terminal extension’. This is a great way to get one of the underrated benefits of the leg extension when you can’t use the leg extension itself.

While this is a great exercise, it does rely on you being able to hold your legs using the strength of your hips and quads. You can build up to this using the tuck and slowly straighten out your legs as you become stronger and more confident with the movement.

Alternatively, you could always get creative with some resistance bands to make the movement a little easier while you develop the strength and familiarity to perform L-sits and make them work for you!

How to Do Leg Raises

If you can’t L-sit, or you want to develop more core strength while you train the knees and hips, you can add leg raises.

Like the L-sit, these require you to strengthen the quads isometrically. One of the benefits that they have, however, is the lengthening and shortening of the hip flexors. The L-sit uses these muscles to hold position, which is a totally different stimulus to the long range of motion that leg raises use.

These movements contribute to the development of the rectus femoris. This is the hip-flexor muscle that we discussed earlier – one of the muscles that is rarely active in the squat or other quad exercises. The leg raise (which can be performed while hanging or lying flat on the floor) is a great way to train these muscles and the stabilizers of the core.

How To: Sissy Squat

Sissy squats aren’t the same as a normal squat, but they’re a great way to focus on quad development specifically. They cut out the hips by having you keep the same hip angle throughout the movement and keep the knee in the same place.

All you have to do to perform the movement is extend the knee. This involves nothing more than allow your hips to shoot up. You aren’t extending the hips so the weight doesn’t transfer to the glutes at any point.

This is an unusual exercise to add into a training regime and it will take a bit of practice before you get the weight/movement right. However, it’s the closest thing to a leg extension you’ll actually be able to perform, it can be used to condition the knees, and it is able to isolate the quad more effectively than many other exercises that you’ll see in a gym.

Simply put, if you’re looking to develop your quads and you don’t have access to a leg extension, you have to be willing to think outside the box. The sissy squat is an amazing way of doing just that.

It’s hard to replace the leg extension for a few reasons.

To start with, it has a totally unique movement pattern that we really don’t see anywhere else in life. You never extend your knee by itself – you have to control the hip while you do it. You’re not levering your leg against a pad in real life, you’re pushing through the floor.

This makes it hard because the position itself is so contrived. The movement isn’t really possible without a leg extension machine or some seriously creative resistance bands. You’re going to struggle to replicate the movement, so we have to focus on developing the muscles and adaptations that the leg extension aims at.

Why is this difficult? Because the leg extension is actually a versatile exercise for everything from quad-building to knee-rehab. The reason you’re using the leg extension is a key factor in how you can replace it in your program. You need to remember that you’re training for an adaptation – not a movement.

When you realize this, you can use any of these exercises to contribute to that goal. Mixing them up is the best choice, as it covers all the muscle groups that the leg extension covers, giving you comprehensive development through the leg. This is also key because strength, power, endurance and joint-protection are all overlap, so a variety of exercises will really round-out your training.