The glute ham raise is one of the exercises that exists that can hit your entire posterior chain in one go. Regardless of your fitness goals or performance requirements, the glute ham raise can benefit you and shouldn’t go astray in your workout regime.

In this article, I will be outlining everything you need to know about the glute ham raise, including what muscles it works, how to do it, what the benefits are and alternative ways of generating similar effects to this exercise.

Which Muscles Does the Glute Ham Raise Work?

In short, a lot of them.

The glute ham raise specifically targets all these muscles in one simple (technique wise), yet effective movement. Doing this exercise will also work your calves, as well as your posterior deltoids and rhomboids if loaded from the back (also considered part of your posterior chain).

How to Do the Glute Ham Raise

Technique should be your main concern when doing any exercise. Not only will correct technique ensure you get the most benefit out of the exercise, but it will also prevent injury. As the glute ham raise involves your lower back, following the correct technique is more imperative than ever. 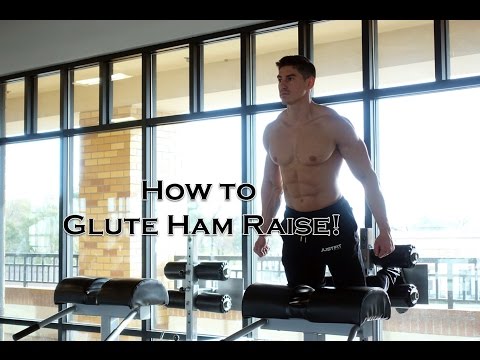 Here is how you do the glute ham raise, step-by-step:

Pro tip: Throughout the exercise, aim to keep your body in a straight line from your knee, hip and shoulder to your neck.

If you feel pain and discomfort (not the good kind) during this exercise, chances are you are doing it incorrectly. There are a few things to avoid when doing the glute ham raise which as to not lessen the effects of the exercise or hurt yourself!

Firstly, avoid bending at the hips. The glute ham raise requires you to keep your body straight, from your knees to your neck. Breaking at the hips takes the tension off your hamstring and puts it onto your hip extensors and your lower back, in an undesired way.

Secondly, watch for hyperextension through your lower back. Always maintain a neutral spine!

And finally, nothing good comes from a machine that is not set up right for you, especially when it comes to the knee pads. Some people manage with their knees on the pads, others need their knees slightly behind the knee pads. Either way, make sure you are comfortable and are not compensating to elude discomfort.

Integrating the Glute Ham Raise into Your Workout

Glute ham raises are best done on leg day. If your training regime does not consist of a muscle group split, i.e. you train full body, then place this exercise towards the beginning of your full body workout. I would recommend 3 sets of 6 to 10 repetitions depending on how many you can manage with perfect form.

If you’re struggling to do this exercise fully, as a starting point you can use a resistance band for support through your repetitions. Alternatively, if you are unable to perform repetitions, you can practice short 5-second holds in the bottom (parallel to the floor) position.

If you’re finding that you can do 3 sets of 10 repetitions easily, without much bother, then it’s time to think about progressing the exercise. You can do this by having your hands straight overhead (increases your lever length), wearing a weighted vest or holding a weight on your back/across your chest.

5 Benefits of The Glute Ham Raise

Often those who are after hamstring gains flock to the hamstring curl machine. However, the glute ham raise is more effective in creating hypertrophy due to its eccentric nature of knee flexion. In addition to this, glute ham raises not only pack mass onto your hamstrings, but also your glutes and calves at the same time!

Performing the glute ham raise can enhance your performance in other disciplines and exercises. For example, glute ham raises are known to increase speed and power, in terms of track athletic capabilities.

They are also known to translate well to commonly done lifts in the gym. In fact, you will find the glute ham raise in many a powerlifter’s programming due to the way in which they can improve one’s squats and deadlifts.

The glute ham raise is a low impact, joint-friendly exercise – this alone means it is a good exercise to do to avoid injury.

However, this exercise also conditions your hamstrings which leads to a lesser chance of pulls and strains. In addition to this, it strengthens your body’s powerhouse muscles. The stronger your hamstrings, glutes and lower back are, the less injury prone you will be, in general!

The glute ham raise is one of few excellent posterior chain exercises that can be done without loading your spine or placing excessive amounts of stress on your lower back. This, therefore, makes it a great exercise for those suffering from back pain, or those who do a lot of loaded exercises and need a de-loaded accessory exercise.

A weak posterior chain leads to excessive spinal flexion. The ability to remain upright without placing a lot of load on the lumbar spine is important in many exercises, but also in a range of everyday general life movements. Performing glute ham raises increases our level of control and allows us to disperse tension and loading through our hamstrings, glutes and lower back.

What About Glute Ham Raises Without A Machine?

The glute ham raise is convenient with its setup and padding. However, if you don’t have access to a glute ham raise machine, don’t worry! This exercise can be replicated without the use of a machine. Ultimately, what you need to perform this movement is something to anchor your feet and pad your knees.

You can try them with a partner holding your feet, or a barbell over your ankles, for example. If you’d like to know more about these machine-free variations and other alternatives to the glute ham raise, check out this article.

Apart from the strength benefits, there are other benefits that can enhance your overall function abilities, like injury prevention, carry over to your other lifts and increased postural control.

Are you a fan of the glute ham raise? Let me know in the comments section below!