For some, squats are a necessary evil to be avoided at all costs. For others, leg day is the highlight of the week. Box squats are the common ground that everyone should consider incorporating into their training regimen.

Box squats are an effective lower body training movement for both seasoned and new lifters. Here’s what you need to know about this exercise and why you should add them to your routine.

What are Box Squats?

Believe it or not, box squatting is about more than sitting on a box at the bottom of the movement. The movement focuses on sitting back rather than sitting down. With a back squat, you’re focusing on engaging the posterior chain and hinging backward until you’re seated on a box while maintaining form. After a pause, you propel yourself upward with explosive power.

How is this different from a regular squat or pause squat?

First, it naturally corrects one of the most common mistakes made with squatting: bending the knees before hinging the hips. It prioritizes that hip hinge movement that’s essential for a powerful squat. Second, it removes momentum from the equation. There’s no bouncing your way back up from “the hole.” You need to stay tight and make your muscles work.

What Muscles do Box Squats Work?

Box squats are an effective exercise for engaging the posterior chain— i.e., the backside of your body. Your posterior chain includes your hamstrings, glutes, and spinal erectors. The box squat also works your quadriceps, but that engagement depends on your stance and box height.

The Benefits of Box Squats

There are a lot of benefits to box squats that make them ideal for both new and experienced lifters. If you have any doubts, the powerlifters at Westside barbell swear by them as an essential part of their training regimen on the road to a 1,000lb squat.

Here are some of the benefits of box squatting to keep in mind.

As mentioned previously, box squats help correct one of the most common form mistakes in both new and experienced lifters. While it’s possible to power through form mistakes, you’ll eventually hit a point where you can’t lift any heavier or sustain an injury.

Box squatting helps instill the idea that your hips have to hinge before your knees bend. It also creates a safety net for new lifters who are intimidated by squats, allowing them to focus on form over fear. Instructing athletes to “sit back” is a common coaching cue for back squats. Giving lifters something to sit back on is tremendously helpful.

While box squats are beginner-friendly, they aren’t necessarily easier than traditional squats. It’s easier to cheat your way through a back squat with poor form than it is with a box squat. However, the box helps with the stability portion of the squat, which makes it easier for a lot of people. Beginner or not, a box squat should still be challenging.

2. Getting Comfortable with Squat Depth

Box squats are also a fantastic way to focus on improving your squat depth. This technique is an important step for squatting, so you get the most out of your exercise. In other words, you can use this exercise to avoid being the person at the gym who ultimately brags about how heavy your quarter squat is.

Setting a box at parallel can help you learn how it feels to hit depth. For competitive lifters, setting the box slightly below parallel helps ensure they hit competition squat depth without going too far into the hole and compromising power.

It’s hard to cheat when doing a barbell box squat. When doing a regular back squat or even a bodyweight squat, you can always use momentum— A.K.A., the stretch reflex— to power yourself upward. With a box squat, that pause at depth changes the game.

Studies have shown that peak power and peak force are significantly higher than during a barbell back squat. If you can get off the box during a box squat, chances are you have the strength to get out of the hole during a regular squat at the same weight or heavier.

If someone tells you that box squats are easier than barbell squats, take it with a grain of salt. It takes a lot of power and focus to be able to stay tight and get back up.

As mentioned before, box squats are great for engaging the posterior chain. This effect is primarily due to the change in stance when box squatting, which tends to be significantly wider than with a traditional back squat. The stance engages the hamstrings and glutes, rather than relying on strong quads.

There’s a common conversation in every gym about whether or not squats hurt your knees. The answer is both yes and no. When performed correctly, and without underlying issues, a squat won’t hurt your knees. If your form isn’t great or if you have previous damage to that area, traditional squats might not be for you.

You can use box squats for bad knees. The wider stance and hinging motion take the pressure off the knees throughout the movement. You’ll notice when you watch someone doing a barbell squat that their knees will naturally come forward to allow for a straight bar path. When box squats are executed properly, the knee stays stacked over the ankle, and the shin stays at a 90-degree angle to the floor. As a result, the load is shifted from the knees to the hips.

How to Do Box Squats Correctly 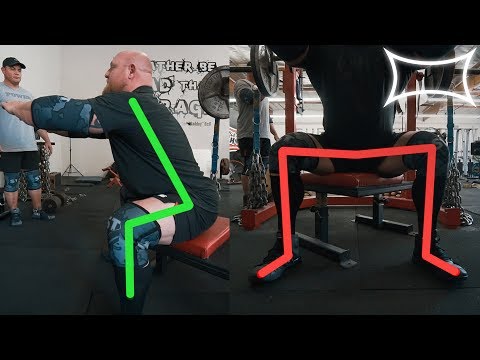 Technique is essential when learning the box squat. Without it, you’ll be stuck on that box, waiting for someone to help you up. Don’t worry, though; it happens to the best of us at least once.

Here’s how to execute this movement properly:

It will take some time to get comfortable and trust that the box is behind you. Do a few reps with no bar to perfect your box positioning before adding weight.

While the box squat is a variation itself, there are plenty of ways to alter your experience to target different muscles or work with the equipment you have available.

Here are some common variations to keep in mind. 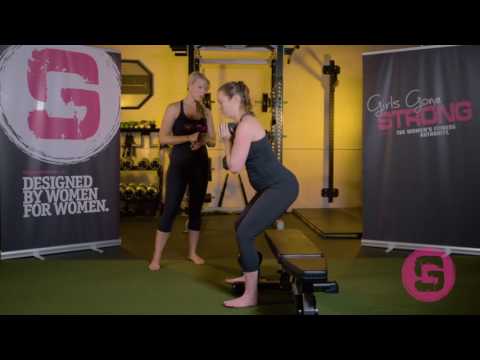 You don’t have to use a barbell to get the benefits of box squatting. Goblet box squats are an effective alternative to the barbell box squat for those who are intimidated by a barbell or have limited equipment. Using a heavy kettlebell or dumbbell is also an effective safety measure when training alone, as its easier to bail.

Regardless of which equipment you use, the motion will be the same. Just be sure to keep your elbows out of the way and hold your weight high enough that it doesn’t impede your movement.

The box height is the most common variation to use when box squatting. By altering the height, you can explore your entire range of motion and focus on pain points. 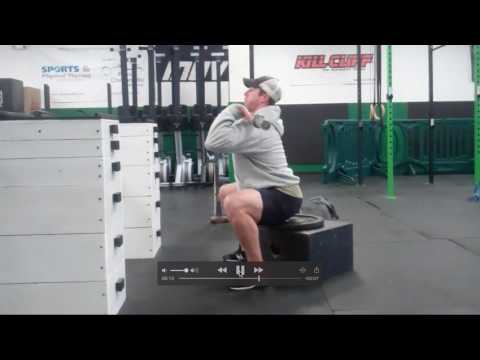 Box squats aren’t just for improving your back squat; they can boost your front squat as well. Many Olympic lifters use front box squats to help develop explosive power and strength out of the hole as the box limits the stretch reflex at the bottom of the movement.

So why would you bother using this variation? If your primary focus is with front squatting or building your quads, this movement can help you build explosive power that will increase your performance.

The benefits of box squats, when performed correctly, cannot be understated. If you choose to add this exercise to your training, focus on form, and technique. Stay tight, pause at the bottom, and use that driving force to improve your explosive strength and power.